Home » MUSIC CHANGES EVERYTHING at The Global Village Project 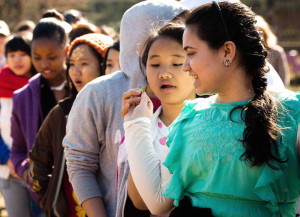 Students at the Global Village Project

The first bone to develop in a baby is the Earbone. The last sense we lose before passing from this life is the sense of sound. Babies are born with all sounds, and to learn the language spoken around them, they eliminate the sounds they don’t need. Patients with Alzheimer’s or dementia can remember all the words to songs they knew in their youth, even when they can no longer recognize their closest family members. And who doesn’t remember their ABCs by singing them?

Sound is vibration. It is literal waves in the air. We can physically feel them. When we hear the harmonies of a gospel choir or a mountain trio or a group of South African singers, we vibrate with the sound. When we hear the tight harmonies of Balkan or Appalachian singing, we hear and feel the waves so close together they actually bump in the air. When we sing, the sound vibrates us to our core. It changes our molecules and the air around us. When we sing with others, we create an inexplicable but tangible, palpable connection.

My work and my life are all about sound — the power sound has to move us. The incredible feeling I get singing alone in a beautiful acoustic, or singing immersed in the voices of singers around me is my greatest passion. And that passion has led me to a life of sharing the power of singing with wildly diverse groups of folks — from schools to community choirs, from professional singers to those (too) many people who sadly believe that they are “unmusical” or “can’t carry a tune in a bucket.” And most recently it has led me to singing with the Global Village Project. 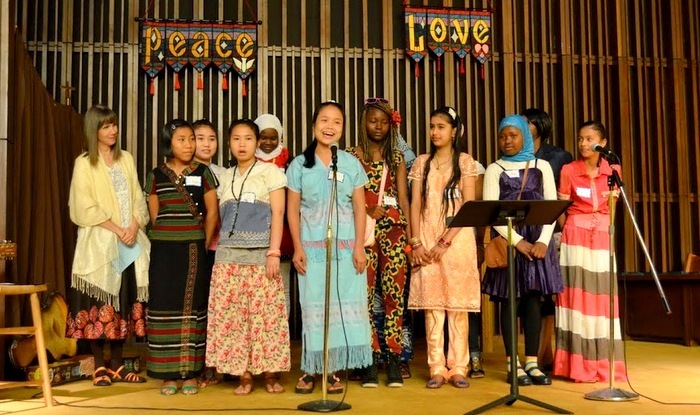 The Global Village Project (GVP) is a special purpose middle school for teenage girls with interrupted education, from Afghanistan, Burma, Congo, Ethiopia, Eritrea, Iraq, Liberia, Nepal, Somalia, Sudan, and Central African Republic. Located in Decatur, GA and now in its 6th year, GVP is fortunate to participate in the Partners in Action program through Alternate ROOTS.

Since its inception in 2008, I have been the Director of the Music Program at GVP. Because music is located in every part of the human brain, singing accelerates and deepens learning of English as well as developing confidence and cooperation. From an occasional all-school Circle Sing the first year, the GVP Music Program has expanded to provide the opportunity for every student to participate in the Global Village Chorus and enhances that experience with Music Classes that focus on vocabulary building, pronunciation, ear training, writing skills, improvisation, and kinesthetic learning.

As a longtime member of Alternate ROOTS, the work I do has been shaped by the work I have witnessed in the ROOTS network, and by the relationships I have formed with ROOTS members. Bringing together my ROOTS family with my GVP family is the most natural and most satisfying partnership imaginable. Inspired by storytellers I have met in ROOTS, last spring at GVP we undertook a cross-curricular project that addressed our challenge of connecting to the greater community, while also joining the skills of storytelling, interviewing, and songwriting with skills of math, science, social studies, and music. 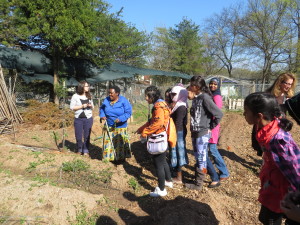 The Women’s Wisdom Project (WWP) was a semester-long experience that involved everyone at the school and reached deeply into the community. It began in Language Arts classes where the students learned interview techniques – how to listen and how to tell story. Their first project was to interview family members at home. These interviews proved very illuminating for the students, discovering stories about their own relatives that they had never heard. 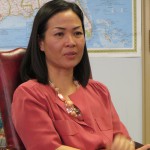 The next phase of the project had each of the three school classes interview a female community leader. Form 3, the most advanced English speakers, interviewed Mimi Vold a Vietnamese refugee who now is a very successful human resources director at a technical company. Form 3 found that the stories she told often mirrored their own stories, even while their ethnicities, languages, and specific journeys were very different. And Ms. Mimi had never told anyone her whole story, so she was extremely moved to connect with the young women of GVP. The students used Ms. Mimi’s words verbatim to write their song, “I Believe We Have a Lot in Common.” 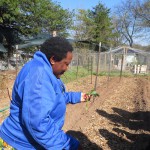 Form 2, the intermediate level English speakers, had been studying about sustainability and food production. They took a field trip to Umurima, the Burundi women’s farm in Decatur. There they interviewed Halieth Hatungimana, one of the farm leaders. They learned a lot about the differences in agricultural practices between Georgia and Burundi, noting which ones were similar and different to their own cultures. They learned some Kirundi words for the vegetables that were growing and incorporated them into the song for Ms. Halieth called “With a Little Patience, Everything Grows.” 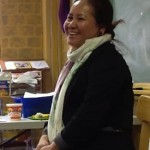 Form 1, brand new English learners (some having been in the US less than a year), interviewed Cybil Kyew Dwe, known to her friends as Naw Kha Kha. Ms. Kha Kha is a leader in the Karen Burmese community and works for the Department of Family and Child Services, where she helps refugees with health and food stamp issues. We found out that she majored in math in college and loves math. She has 2 names, has lived in 3 countries, speaks 4 languages, has 4 sisters, started learning English in grade 5, and has had at least 8 jobs. She also cried for 3 months when she first came to America. The song for Ms. Kha Kha is called “Whatever Chance Comes, Take It!”

In addition to cross-curricular projects like the Women’s Wisdom Project, GVP is creating an ever deeper arts integrated curriculum. We now have a Music Team on which I am joined by Anna Swaray – originally from Sierra Leone and trained in jazz and choral performance; Jessica Lily – singer, songwriter, photographer, videographer, and web designer; and Sara Moylan – theater, dance and music specialist, recently returned from 2 years teaching in Ecuador.

We are learning songs from the cultures of each of our students, as well as learning songs from the global peace and justice repertoire. We are staying in touch with our alums by inviting them back to sing in the GVP Ensemble. Our GVP Chorus and Ensemble are performing at venues around the community, providing a public face for the school.

How does your garden grow?

We have a cadre of professional instrumental musicians who are offering private lessons on piano, guitar, and ukulele. We have a monthly “GVP’s Got Talent,” in-house event, at which the students get to share their passion for dances, songs, and poems with each other. And we have a bi-monthly Authors’ Tea, at which the public is invited to experience in music, poetry, dance, and art, what the students have been working on in all their classes.

We continue to build relationships with organizations that serve the students and their families, partnering with social service agencies including Refugee Family Services, International Refugee Committee, and Global Growers Network; community institutions like the Clarkston Farmers’ Market, the Clarkston Community Center, and the Clarkston and Decatur libraries; and local colleges and universities including Agnes Scott, Georgia State, Georgia Tech, Georgia Perimeter, Emory, Berry College, and Kennesaw.

The Women’s Wisdom Project is one of the many ways that GVP uses music to empower the young women, who are the future of our community and our world. The United States is changing rapidly with the arrival of refugees and immigrants from the many war torn countries affected by our own policies. And the irony of this safe harbor does not escape me.

Music is making a safe harbor for these young women to acclimate and explore this, their new environment, the world that they will shape into their and our future. And I believe that music will be a vibrant part of their new world.

How has music changed your life?