Home » Sing it Down! Volume 2: Songs to Close the SOA 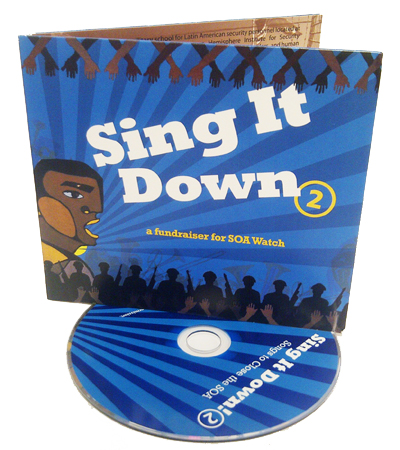 Pete Seeger called SOA Watch “the singin’est movement since Civil Rights!” Cultural workers have had a tremendous role in shaping the movement to close the School of the Americas. I am honored to be part of the Musicians’ Collective for SOA Watch, the movement to shut down the School of Assassins at Fort Benning GA. SOAW has just released Sing it Down: Songs to Close the SOA.

100% of the proceeds go towards the organizing work to close the SOA, and to change U.S. foreign policy.

Sing it Down! Volume 2: Songs to Close the SOA includes these great tracks:

1. Gonna Take Us All by Jon Fromer
2. Introduction (Excerpt from Archbishop Oscar Romero’s last homily)
3. Romero by Jolie Christine Rickman
4. One by One by emma’s revolution
5. The News, the Blues and the People by Charlie King and Karen Brandow
6. Mimi LaValley and 100 Nuns by Prince Myshkins
7. What This World Don’t Need by Maurice Turner, II / M.U.G.A.B.E.E.
8. Esperanza by Los Vicios de Papa
9. Manifiesto by Colleen Kattau
10. Broken Hands Play Guitar by Rebel Díaz
11. Crónica inmigrante by Quinto Imperio
12. Atrévate a soñar by Francisco Herrera
13. Taquirari de los vientos by Vientos del Pueblo
14. Open the Window by Elise Witt
15. Eyes Wide Open by Voices
16. Crossing Over by Joe Jencks
17. Everything Can Change by David Rovics
18. The Ballad of Roy Bourgeois by Steve Jacobs
19. Peace Becomes You by Holly Near

To order the Sing it Down CD, visit