Posted on September 28, 2015By collinIN The Loop

Atlanta-based singer-songwriter Elise Witt has spent her entire adult life making a living as a singer. Those with deep Atlanta roots will remember her band from the ’80s,  Elise Witt and the Small Family Orchestra, a staple act at community events and social justice demonstrations. Elise has gone on in her musical studies to become a renowned teacher of singing and is the founding director of the Impromptu Glorious Chorus, a community singing group, and is director of music programs for the Global Village Project which works with teenage refugee girls. She brings together her history and experiences as a performer and teacher in her genre-defying new album, “We’re All Born Singing.”

Elise moved to the United States at age 4 from Switzerland and speaks five languages fluently. She says she discovered her earbone in leaning the sounds of language, that each language has its own music and that every language has expressions that cannot be translated exactly. She has created a program for her students at the Global Village Project where she is a teaching artist that is “a musical trip around the world.” Elise says, “music is language and language is music.” Through the Georgia Council for the Arts she has taken this experience to students all over the state.

A founding member of Theatrical Outfit, Elise has brought her philosophy that “everyone has a voice” to workshops around the US, but also in German in Switzerland and in Italian in Italy. She has worked extensively with singers Bobby McFerrin and Rhiannon on the concept of the Voicestra, singing in the round while composing on the spot.

All the strains of the work Elise has been doing through the years shine through in the new album. Terry Garthwaite of the Joy of Cooking co-produced the album with Elise. Atlanta singers Gayanne Guerin, Tommy Britt and David Dean join pianist Mick Kinney and a host of other singers and musicians in collaboration with Elise. Most of the album was recorded here in Atlanta at 800 East and engineered by sound wizard Ken Gregory. The album is not just a collection of songs, but Jessica Lily’s design for the packaging and booklet make the music tactile and part of the experience.

Elise will debut “We’re All Born Singing” on Thursday, Oct. 1 at 7 p.m. at Oakhurst Baptist Church in Decatur. For more information on the concert and the album, visit www.elisewitt.com. 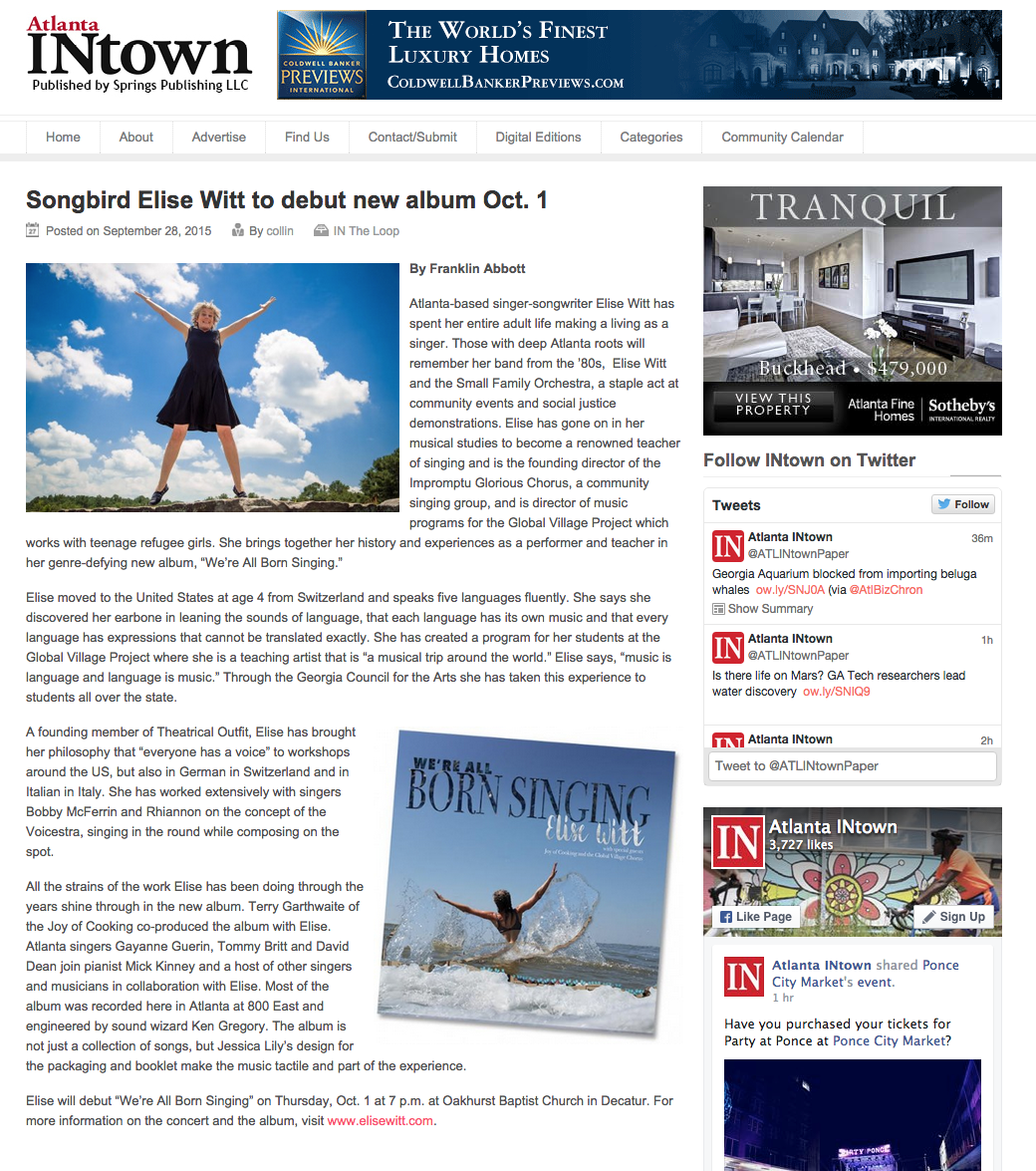