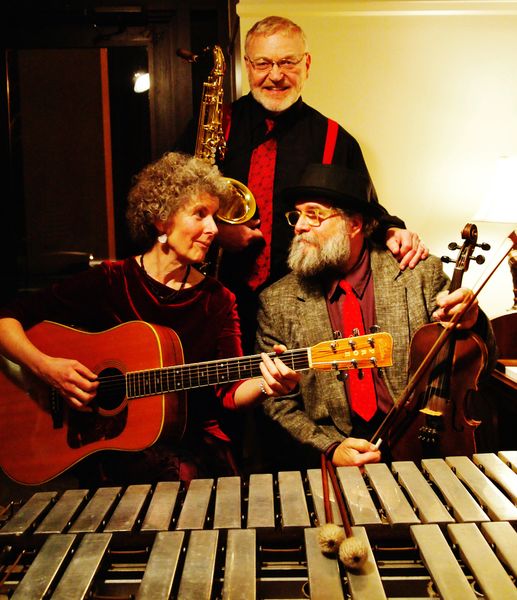 When Mick Kinney’s wry humor and exquisite piano playing meet Elise Witt’s chameleon voice and world music repertoire, just such an unlikely but perfect musical event is created. With songs from the sublimely romantic to the superbly ridiculous, Elise and Mick complement each other’s compositions, singing soulful harmonies and engaging the audience with their hilarious antics.

The duo’s repertoire includes originals  like “You Got Me” and “Bittersweet” (duets penned by Kinney and accompanied by his jazz piano), “Spiral” (Elise’s swing theory) and her love song to science “Natural Phenomena” (with Elise’s guitar and Mick’s fiddle spanning Georgia old time, Greek sirtaki, and French gypsy). Add to this a bevy of songs in a variety of languages, and a few selections where the audience becomes the glorious back up chorus, and you have a portrait of an unforgettable concert with Mick & Elise.

ECLECTIC FIDDLE with Mick Kinney
Shindig? Ruckus? Craic? Bon temps? Jive?  Like speech, music has a variety of accents, lilts, slurs, and rhythms. In this class, we will build a repertoire in a wide range of fiddle styles – Old Time Monday, Blues Tuesday, Celtic Wednesday, Cajun Thursday, and Swing Friday. You’ll pick up tunes in several genres as well as tips and techniques essential to each.

JOIN A BAND!  with Mick Kinney
Playing in a band is a great experience that can help develop musical skills that are invaluable to any musician. This is an opportunity for those who have already achieved some proficiency on their instrument or voice, to test the waters of group playing. In this class, we will assemble several ensembles of various styles (you choose your favorite), and learn what makes a band tick.

What they’re saying about Mick and Elise:

“You were absolutely marvelous!!  I feel as though we have known each other for years instead of days. Thanks again for a wonderful evening!  Our customers are still buzzing about it!”
Merle Dollar, Local Color, Springville AL

“You all are simply the greatest!.  Sunday night’s concert was great fun and a boost to the spirit and a lift for the heart.  We’re all happy around here and humming various tunes as we go about our this-es and that-s.  In a word, thank you !”
Murphy Davis, Co-founder, The Open Door, Atlanta GA

“The music was beyond lovely, compelling, danceable, and perfect for our interest in the great variety of world waltz and related music.   You and Mick sho’nuf have the magic touch. When can you return? Danse on, danse on.”
Sid Hetzler, Atlanta Waltz Society 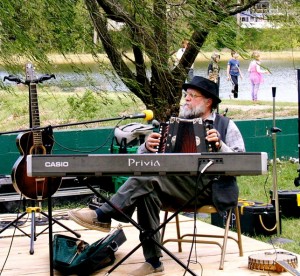 “He sure do play them horse teeth!” quipped 95 year old clarinetist Stranger Malone of Mick Kinney’s barrel house piano style. Along his musical journey, Mick has played stride piano at Manhattan’s Swing 46 with veteran tap dancer Harold Cromer (of Stump & Stumpy), fiddle with Creole jazzman Al Broussard in New Orleans’ French Quarter, and lap steel at Louisiana’s Cajun Rendez-vous. He has performed at McCabe’s in Los Angeles, the Bluebird in Nashville, and on NPR’s Mountain Stage. A native of Wisconsin, making his home in Atlanta since 1977, Mick is a versatile accompanist. He has worked with John Hartford, Sarah Guthrie, Vic Chesnut, Victoria Williams,  REM’s Peter Buck, and his brother Kevn. Currently Mick tours with multi-lingual chanteuse Elise Witt, as well as with his swing string band the Gypsy Hicks and his old-time band the Georgia Crackers.

Named Best Unknown Artist by Stomp and Stammer magazine, Mick calls his songs “videos for the ear.” His recording of original songs Nothing Left to Chance was named Critics Choice by Creative Loafing in 2002.  He followed that with Rag Nouveau, a CD of original ragtime piano compositions, which drew wide praise in the international milieu of Ragtime aficionados, press, and musicians. The eagerly awaited Mick Kinney Secret Songbook, a collection of original retro cabaret songs, is due out any moment now.

Mick’s original songs display a fondness for the word craft of Ira Gershwin and Cole Porter, and he is equally at home in styles as far ranging as the gritty folk music of Tom Waits, Bob Dylan, and Woody Guthrie, and the roots old time of the Carter Family and the Georgia Skillet Lickers. His vocal personas are reminiscent of the wistful crooning of Rudy Vallee and the soulful growl of Satchmo. A lifelong admirer of Fats Waller, Charlie Chaplin, and music hall singer Harry Lauder, Mick’s delivery demonstrates his affinity for pathos and humoresque.

The piano compositions of Mick Kinney are grounded in the early 20th century Ragtime of Joplin and Lamb, yet incorporate numerous influences of other genres into a genuine pan-American style. Not unlike current Terra Verde pianists, or their antecedents such as Gottschalk, Nazareth, and Jelly Roll Morton, Kinney’s pieces could well have been written in the Romantic Period. His approach is more hemispheric than provincial, making frequent use of Habenera and Tango motifs, while drawing from the manifold sources of his own career catalogue.

In addition to his inimitable stage presence, Mick is also a beloved teacher of fiddle, piano, guitar, banjo, and music theory in his home of Atlanta and at workshops around the country and abroad. He has been on the staff at prestigious music camps like the Swannanoa Gathering, Florida Rhapsody, the Georgia Folk Festival, Alabama Folk Life, Nashville’s Breakin’ Up Winter, and has also taught American Roots music on tour in Italy to great acclaim (both for his musicality, and for his communication in Italo-Fren-Spanglish!)

A recipient of the Georgia Council for the Arts Folklife Grant, Mick was a longtime collaborator with Georgia music legend Stranger Malone, whose music he continues to preserve and perform. Mick now serves as roots music consultant for the Georgia Humanities Council, and has produced numerous events celebrating Georgia’s rich musical heritage from the Appalachian mountains to the coastal plains.