Lake Claire neighbors know Elise for her Impromptu Glorious Chorus™ community singing classes and workshops, which she has taught in our neighborhood since she moved to Atlanta in 1977 as a founding member of the Theatrical Outfit. Currently, Elise is teaching at the Candler Park Yoga Studio, and the next 6-week session runs Monday evenings 7:30 – 8:45 p.m., Oct. 12 – Nov. 23.

In addition to being an international songstress, she is the winner of the William L. Womack Creative Arts Award. Bobby McFerrin’s Voicestra founding member Rhiannon calls Elise’s new CD “brave and beautiful!” We’re All Born Singing is a wild departure from the 11 previous recordings. Spoken word, choral pieces, and soundscapes join with an array of lush arrangements celebrating the power of music, especially singing, to vibrate us body and soul and bring us together as community.

Collaboration is the name of the game for Elise’s new songs. And because the theme of the music is centered around the human voice, there are some wonderful singers adding their voices to the mix. At the concert and on the CD, expect a stage full of singers including Gayanne Geurin, the Dean Brothers (Tommy, Britt & David), Sonia Osio, Sara Moylan, Ann Connor, Rebecca Keel, Sara Gregory, and students from the Global Village Project, a school for teenage refugee girls in Decatur, where Elise is the director of Music Programs. And if you sing in a choir or chorus, you will be happy to know that you can get choral arrangements of Elise’s music. They are available for women’s, men’s, and mixed voices in the Elise Witt Choral Series.

Elise told the Clarion, “Perhaps my favorite instrument on the CD is the Glass Harp. Atlanta’s Brien Engel travels all over the world with 50 glasses sized from a giant brandy snifter to tiny shot glasses. The Glass Harp appears on the songs Bees Make Honey and Amoeba. By the way, Brien also plays Mbira (Zimbabwe thumb piano, which you will hear on I See You With My Heart one of several musical language collages).”

The CD was co-produced by Elise and Terry Garthwaite from the iconic San Francisco Bay Area band Joy of Cooking. Terry adds her bluesy vocals and solid guitar rhythms at the concert and on the CD.

Admission for Elise Witt’s Oct. 1 CD & Book Release Concert at Oakhurst Baptist Church in Decatur is by donation at the door, sliding scale $10-85, with the suggestion to “be affordable and generous.” The new CD & Book will be for sale at the concert and online at www.EliseWitt. com. If you order online, you can pick up your copies right in the neighborhood at Candler Park Flowers, 1395 McLendon Ave., at the corner of Oakdale. 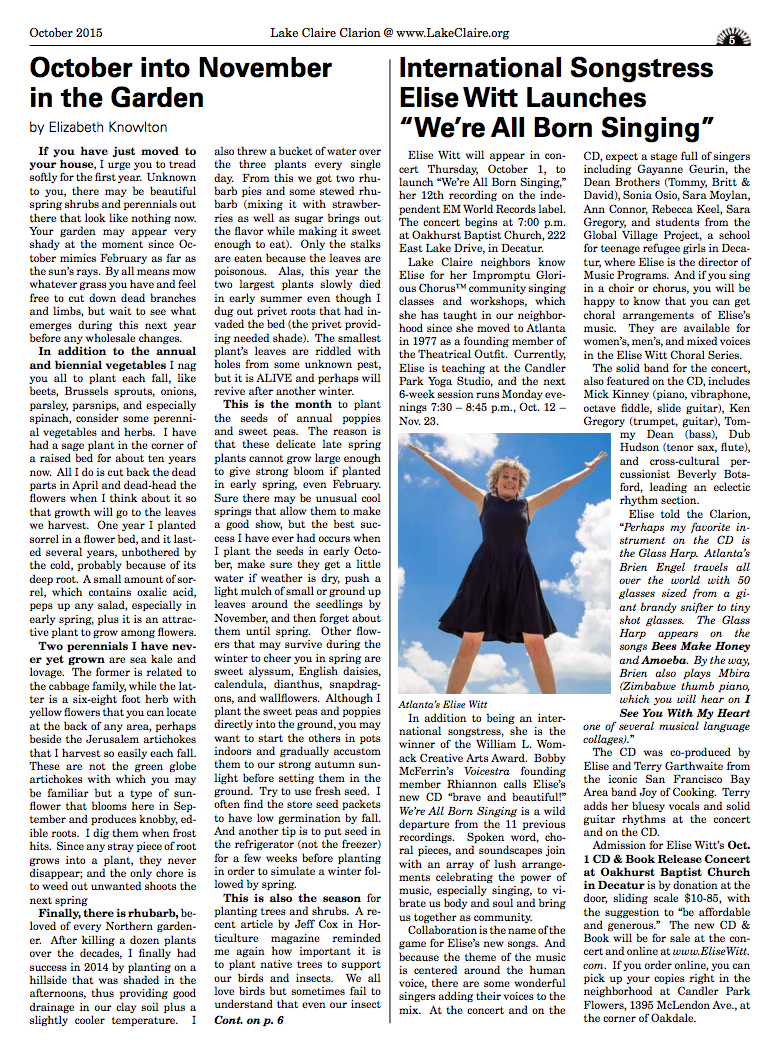